Need help for information on the floor mat.

I live in Tokyo Japan.

I bought a floor mat of 968 from the mail order company in US the other day. However, the shape was different from my 968's floor. For my indication, the company's answer was that "this is the correct pattern for the North American version of 968".

I knew that a bumper and the high-mount stoplight of the North America version are differences from Worldwide version. However, I have thought the shape of the basic body was the same. And my friends in Japan who owns 968 parallel imported from US have opinions same as me.

The attached image is the mat which has been sent for 968 use this time. All I'd like to know is whether North America version is in the shape of a special floor or not. 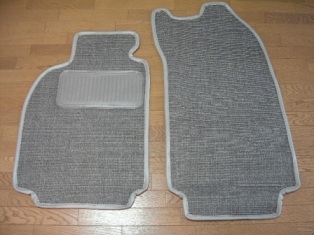 Permalink Reply by Brett Reistad on June 13, 2010 at 10:31pm
These look nothing like the shape of floormats I recently purchased from Lloyd Mats for my 1994 968 Cabriolet. The mats I purchased fit perfectly. I'd return them and ask that you let us know who the vendor is so that we can avoid ordering from them - assuming that they insist these are for the 968.

Thanks a lot! Your opinion is very reassuring.
The company I've ordered it is "Performance Products".
Though the company is major and famous, the correspondence of first parson in charge was insincere and he was going to let me give up for a groundless reason above. I was very embarrassed with his correspondence, because of the distance between Japan and US. The shipping charges are very expensive.

As a result of tenacious negotiations, the person in charge changed and promised faithful correspondence.
Five months have already passed from the first order.
I'll report it again in the next progress. Thanks.